It’s that time of year when we tend to think in terms of years. People create new year’s resolutions, even though there is a lot of evidence they don’t actually help reaching goals. And in the business world, we create annual budgets.

In my experience, however, too many law firms either don’t create budgets at all or create them badly. In particular the folks who run small law firms seem immune to seeing the following pattern:  almost every large organization that generates millions of dollars of revenues has a formal budgeting process and small less successful ones don’t. That might not be a coincidence, but trying to convince solo practitioners of that can be a tough sell. And that says a lot more about the business savvy of many law firm leaders than it does about the wisdom of budgeting.

So how can law firms create more effective budgets? The answer lies partially in trying avoiding a problem inherent in annual budgets. Law firms can often project expenses fairly well over the course of an entire year. But forecasting revenues for law firms is often more complicated. And too many law firms succumb to wishful thinking when projecting annual revenues. The first six months are realistic but fall short of some target, but revenues magically improve during the second half of the year.

Moreover, projecting revenues annually tends to reinforce marginal thinking. Lawyers are too influenced by precedent as it is, and they tend to forecast financial goals that largely recreate prior years’ results.  It’s stare decisis brought to the world of law firm finance.

A better approach is to force yourself and your organization to see what it can accomplish financially in a relatively short amount of time. A six-month revenue target can be a good way to get a law firm to focus on how it can grow quickly instead of incrementally. So on this the last week of 2015, try creating a budget that ends on June 30, 2016.

Have a happy and prosperous half-year! 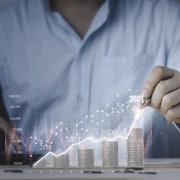