You are here: Home // Blog // Don’t Forget Your Exes & Your Near Misses

Don’t Forget Your Exes & Your Near Misses

Law firm marketing efforts tend to focus on the new; new clients, new practice areas, and new lateral partners. At many firms, marketing efforts directed to the old often take the form of electronic newsletters and, this time of year, holiday cards. In this context, old primarily refers to former clients and referral sources.

If this describes your law firm’s marketing strategy, you are probably overlooking a more promising target audience than many of your new prospective clients. Rather than focusing exclusively on the bright, shiny, new potential client, devote some of your marketing efforts to client relationships that turned sour and those that considered retaining you and went in another direction. These are your exes and your near misses.

If you read the last paragraph and cringed, you are in good company. Thinking about exes and near misses brings back unpleasant memories, and it’s only natural to want to avoid pain and focus on the promise of a new, unspoiled, client relationship. It would be a natural reaction to avoid reaching out to clients that previously fired you and those who refused to retain you in the first instance. It would also be a mistake.

Marketing to exes and near misses has one dramatic advantage over marketing to new potential clients. They already know you and at worst they came close to retaining you. And that in turn means that on average it will be cheaper and faster to market to them than to a stranger. It’s not as if you have a 100% success rate with new potential clients and referral sources. Thus, it’s not a valid criticism that many or most of your repair efforts might not be successful. That’s the nature of marketing.

To be sure, some client relationships cannot be salvaged. But that misses the point. I’m not suggesting that you will repair every past relationship. My experience, however, is that it is profitable to identify relationships that require some repair. Most often, these are relationships that broke down because of a bad result that was achieved on a particular matter. If a relationship was generally solid and mutually beneficial before the break up, it is a good candidate for your repair list. This is true even if the break itself was difficult, painful, or dramatic.

The case for following up or staying in touch with near misses is even more compelling. In contrast to exes, these are folks who usually don’t harbor strong negative associations against you. They simply preferred someone else.

When reaching out to former clients, be mindful of the ethical rules in your jurisdiction regarding contacting a party that you know is represented. You certainly don’t want to run afoul of rules regarding impermissible solicitation. Most of the time, however, the solicitation rules don’t come into play because the best approaches to rekindling a broken relationship do not begin with a direct request to be retained.

If you want to reach out to an ex or near miss, make the first communication positive, short, and non-demanding. Thus, for example, I have seen a simple request to connect on LinkedIn restart a dormant relationship. Likewise, it can be effective to send an email congratulating the ex or near miss for an accomplishment that is part of the public record. This time of year, strongly consider sending holiday cards to exes and near misses. You want to make it as easy as possible for the ex and near miss to respond in some way.  That’s why the LinkedIn request works well; they simply have to click once to accept your request to connect.

In many cases, repairing a broken relationship will require face-to-face interaction and perhaps more than once. But you don’t have to start there. In fact you generally shouldn’t start by asking someone you haven’t seen in a while to join for you lunch. That’s often too big of an initial step for them to take.

You need to undertake an individualized analysis of what is likely to work in each situation.  The key, however, is to start and make sure that your ongoing marketing efforts include some exes and near misses. 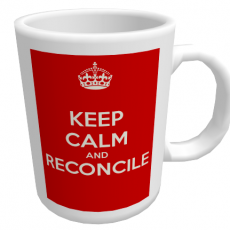 Thanks to keepcalm-o-matic for the use of this photo.