You are here: Home // Blog // Increasing Retention of New Hires at Law Firms

Too many law firm leaders subscribe to a plug-and-play mentality when it comes to hiring. They believe that you can take someone who has certain skills and essentially get them to produce effectively in a short period of time. Firms recognize that the new hire needs to learn about the firm’s time entry, billing, and other computer-based systems. But other than that, it’s assumed, for example, that litigation associates who have experience writing certain kinds of briefs will start being productive beginning on their second day on the job.

The problem with this mentality is that humans aren’t plug-and-play creatures. Hiring legal talent is not like moving a computer from one room to the next. To the contrary, we are very sensitive to even small changes in routine and environment. Internally, we feel lousy when our internal body temperature changes by as little as one degree. And to name just one example, I’ve seen lawyers get thrown off by the fact that the coffee at their new job doesn’t measure up to the morning coffee that they are used to.

The plug-and-play mentality also fails to recognize how long it takes for lawyers to feel really comfortable at their new employer. In my role as a business consultant to law firms, I have encountered numerous managing partners and law firm leaders who are surprised to learn that it commonly takes up to two years for a lawyer to make a complete transition to a new firm. This is partly because lawyers are probably more resistant to change than most humans, but mostly it’s just a reflection that lawyers are human.

Does this mean that you can’t expect a new litigator or transactional lawyer to bill sizable numbers of hours right away? You can, and many experienced lawyers do manage to be productive billers fairly quickly. This is especially true if they are working on projects or clients that followed them to their new firm. But there is more to feeling comfortable at a new firm than billing hours.

A better approach would be to view the process of hiring someone as akin to adding a new roommate to an already full house. The new person will figure out the basics quickly. They will park in the correct spot, they will figure out how the new shower works and, if it’s important to them, they will figure out where the closest good coffee can be had. But working out the interpersonal dynamics between the new person and the existing residents will take time. In fact, some problems between roommates won’t even surface for months or years. That’s why scenarios involving roommates make for good reality TV shows. The potential for conflict and drama is ever present.

This same dynamic applies to that new lawyer or paralegal who bills a large number of hours every month. It’s not unusual for the person changing firms to be surprised about how long it takes them to fully adjust to their new surroundings. After all, they too might buy into the plug-and-play myth.

If you are the assigning partner, managing partner, in the HR department or otherwise have a responsibility for staff retention, stop being surprised that the care and feeding of lawyers is a never ending process. And since law firms don’t have much to sell other than the abilities of their employees, the sooner you stop expecting that new hires will “hit the ground running,” the more successful you will likely be in attracting and retaining the best people. And if you really want to have a competitive advantage vis-à-vis other law firms, establish a mindset that accepts and even celebrates the complexity of the human beings that you are bringing onboard. 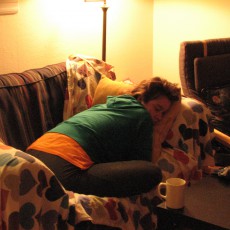 Image courtesy of a very tired Amanda under this license.