You are here: Home // Blog // Keep More Cash in the Register

Keep More Cash in the Register

For too many law firms the holiday season is accompanied by an unfortunate tradition. It’s not the bad egg nog or the awkward silence that follows an inappropriate comment made by a lawyer who had too much to drink.

This law firm holiday tradition is financial in nature. Specifically, it’s when the equity partners of the firm take out virtually all of the firm’s cash to pay themselves at the end of the year. This is a practice that I have repeatedly encountered when consulting for law firms. The firm essentially starts every year as if it’s a brand new entity because it lacks a meaningful cash reserve.

This is particularly pernicious because, for many law firms that bill by the hour, January and February are their worst months in terms of revenues. The attorneys at such firms tend to bill fewer hours in November and December, and this in turn causes revenues to decline in the following January and February. Likewise, firms tend to incur more expenses in January, such as those related to payments for annual dues and subscriptions. Thus, the firm’s partners deplete the firm’s cash just before they are particularly likely to need it.

Why do law firms reduce their cash reserves at year end?

For some it seems to be a habit that they follow unthinkingly. Too often, however, the need for cash comes from the financial needs of one or more of the equity partners.  They may feel the need to support a lifestyle choice or to meet their personal cash flow crunch. This can lead to a race to the bottom, where the partners who are least responsible and stable cause the firm to make unwise financial allocations.

If you or your law firm is in this position, the first step to building an appropriate cash reserve is to determine how much cash the firm needs to save and keep on its books.  This amount is connected to the firm’s sales cycle and fixed costs. If, as in the example mentioned above, you bill by the hour and typically collect 2-3 months later, it can make sense to build a reserve that is equal to 2-3 months of billings. This will give you the security that the firm will still be on a solid cash footing even if collections drop precipitously.

And you probably should set aside a larger cash reserve if your firm predominantly charges a contingency fee and your pipeline of cases may not bring in money for many months at a time. For example, I consulted with a firm that had no revenues between January and October and then collected more than seven figures from two cases in November and December. This was a record year for the firm, but the cash flow pressures and need to maintain cash reserves were manifest.

In terms of fixed costs, it can be useful to use your payroll expenses (and multiples thereof) as targets for your cash reserve.  Thus, if you currently have a nominal cash reserve, set an initial target of saving enough cash (or collecting enough capital contributions from partners) to exceed the expenses generated for one payroll period. Once you have reached that target consistently, increase your savings goal to two payroll periods, etc.

A line of credit can of course also play an important role in helping a firm meet its cash flow needs. But credit lines often include complicating provisions, such as requiring law firm borrowers to pay back the entire amount that was borrowed plus accumulated interest by the end of every year. Thus, well-run firms maintain cash reserves that can be used as the first line of defense should something happen to reduce revenues or stymie collections efforts.

For many firms, meeting the cash reserve targets outlined above will require a sea change in how they think about cash flow and manage their finances. At a minimum, however, make this the year that you stop depleting almost all of your firm’s cash just because holiday music is filling the air. 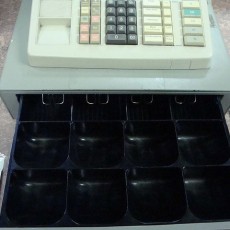 Image courtesy of Deborah Fitchett under this license.

One thought on “Keep More Cash in the Register”