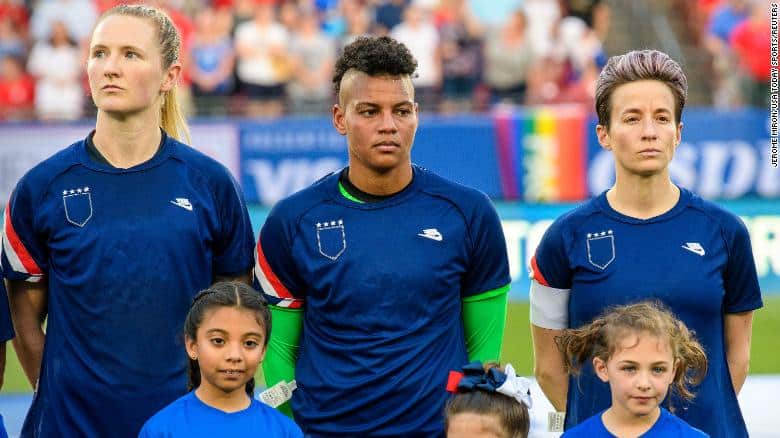 An argument put forth by Seyfarth Shaw in defending the U.S. Soccer Federation against allegations of pay discrimination has landed the athletic organization in hot water with sponsors and fans. Remarkably, last night the President of U.S. Soccer, Carlos Cordeiro, resigned as a result of the backlash to an argument made in a legal brief.

Lawyers representing U.S. Soccer filed a brief in opposition to the U.S. Women’s National Team’s (“WNT”) motion for partial summary judgment concerning a suit claiming players were paid less per game than members of the Men’s National Team as a result of sex discrimination. Most of the Seyfarth lawyers named on the filing are women.

The argument that started the fire storm is set forth on page 11 of their brief and posits that the reigning champions of the FIFA Women’s World Cup do not possess the same level of skill as their male counterparts:

As Plaintiff Carli Lloyd’s testimony admits, the WNT could not compete successfully against senior men’s national teams because competing against 16- or 17- year-old boys “is about as old as [the WNT] can go.” (Lloyd Dep. 103-04, 106-07; Lloyd Dep. Ex. 15.) Plaintiffs ask the Court to conclude that the ability required of an WNT player is equal to the ability required of an MNT player, as a relative matter, by ignoring the materially higher level of speed and strength required to perform the job of an MNT player.

Categorizing their point as “indisputable ‘science,'” representatives for U.S. Soccer also referenced discrepancies in viewership and revenues in defense of higher pay for the Men’s National Team.

We have sort of felt that those are some of the undercurrent feelings that they’ve had for a long time, but to see that as the argument — sort of blatant misogyny and sexism as the argument against us is really disappointing.

In a statement issued after the sponsors started to publicly distance themselves from U.S. Soccer’s legal strategy, Cordeiro apologized for the language, saying, “Our WNT players are incredibly talented and work tirelessly, as they have demonstrated time and again from their Olympic Gold medals to their World Cup titles.” Perhaps in a move to mitigate the damage, U.S. Soccer retained law firm Latham & Watkins two days after the brief was filed.  It’s unclear if Latham will replace Seyfarth or collaborate with the existing representation. Cordeiro explained:

I have made it clear to our legal team that even as we debate facts and figures in the course of this case, we must do so with the utmost respect not only for our women’s national team players but for all female athletes around the world.

Within 24 hours of making this statement, Cordeiro resigned.

The Women’s National Team is suing for “equal playing, training, and travel conditions; equal promotion of their games; equal support and development for their games; and other terms and conditions of employment equal to the MNT,” arguing under the Equal Pay Act and Title VII of the 1964 Civil Rights Act. The case is set for trial this May in the U.S. District Court for the Central District of California.

We may never know the history of how this argument concerning the relative abilities of male and female athletes made it into the brief. Seyfarth’s brief does advance some fairly persuasive arguments, including the fact that the United States WNT is complaining about a pay structure they themselves negotiated in a collective bargaining agreement. It’s even possible that Seyfarth lawyers objected to the inclusion of the controversial argument and were overruled by their client.

What is crystal clear, however, is that lawyers can no longer assume that their conduct – including arguments buried in briefs – will not see the light of day. Large law firm attorneys in particular have benefited from relative anonymity. People have given them credit for working at well-known firms without knowing what they actually argue on behalf of clients. All lawyers need to be aware that, in a social media age, those days are long gone.