Many lawyers struggle to build a book of business because they are on average less resilient than entrepreneurs. Research has shown that as a group lawyers are dramatically less able to bounce back from negative events than most people. And law schools and law firms tend to go out of their way to find high-achieving folks who have experienced fewer setbacks than their classmates. The elite law schools esteem students who have never experienced anything but A’s and B’s and the B’ s are often a rarity. Moreover, good grades are often accompanied by praise and status, so many law school graduates enter the legal profession with little or no experience in dealing with bad news relating to their professional abilities or mental acumen.

Building a law practice, however, is a constant exercise of dealing with bad news. No one gets straight A’s or succeeds almost of all the time when creating a robust referral network. Most marketing and networking efforts are not successful, especially in the short term. And unlike school, running a business doesn’t have the finality of exams. It’s more of a continuous process, especially when it comes to retaining new clients. As Alec Baldwin’s character in Glengarry Glen Ross famously stated, “Always Be Closing.” This isn’t literally true. Successful lawyers don’t always have to be working. Some downtime is beneficial. Nonetheless the business aspects of law require the ability to deal with disappointment on an ongoing basis.

Some observers have suggested ways in which lawyers can be made more resilient. And that is a possibility. But a better and often overlooked approach is to select in the first instance lawyers for resiliency that is relevant to building a business.

This would be a much broader inquiry than just looking at grade point averages. For example, it would be refreshing if law firms found out whether a junior associate has any fundraising experience that involved overcoming the initial objections of a donor. Perhaps they were part of a fraternity, sorority, or club and were involved in recruiting members. Or perhaps law firms could would ask a lateral with a modest book of business about how much time passes before they typically conclude that it’s no longer worth following up with a potential client. In my experience for many lawyers that time frame is remarkably short, often measure in days. That’s because they either don’t know that the sales process routinely lasts for months if not years, don’t even track how long the sales process has lasted with a particular client, or even more importantly, lack the desire to overcome feelings of personal rejection.

There are many ways in which you can collect information about someone’s proclivity for being business-savvy resilient. As with many aspects of life, past performance is some indication of likely future results, so better to find someone with some demonstrated experience showing relevant kinds of resilience than trying to teach lawyers new tricks. 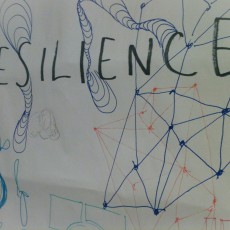 Image courtesy of Neil Cummings under this license.