You are here: Home // Speech Coaching

Craft and Deliver Speeches That Attract More and Better Clients

Most lawyers know that giving speeches is a potentially useful way to attract good clients.

But haven’t we all sat through countless MCLE programs and other attorney presentations that were lackluster and eminently forgettable? There are several understandable but curable reasons for this. It’s not that the speaker didn’t know their stuff. In fact, one of the most common reasons that speeches underperform as marketing tools is that the speaker attempted to convey too much information. And the marketing effectiveness of a presentation depends on more than just what speakers say. It’s also a function of being at the right venue, crafting compelling marketing materials that will drive people to see the speech, how the speech is delivered, and how the speaker follows up with interested audience members following the speech. Through no fault of their own a vast majority of lawyers have never been trained to prepare and deliver a speech that will impress and attract potential clients and referral sources.

Rainmaking for Lawyers can help you maximize the chances that your next presentation will be a marketing magnet and that you will feel prepared and comfortable delivering your speech. Our founder, Gideon Grunfeld, is a professional speaker, a member of the National Speaker Association, and the former President of its Greater Los Angeles Chapter. In that capacity, he trained more than 100 aspiring speakers who were looking to be paid for their speeches.

Examples of Our Speech Coaching for Lawyers

Since 2006, Gideon has worked with lawyers to prepare and deliver dynamic speeches with creative visuals that are an effective marketing tool.

An IP litigator who had spoken at local seminars was for the first time speaking at a national conference that would be attended by his best potential clients – in-house counsel at major biotech and other high-tech companies, as well as attorneys at universities that sponsored large-scale drug trials. Over several weeks we helped him prepare and rehearse a compelling speech and create his PowerPoint presentation with interesting visuals. In addition, we worked together to identify a handful of attendees that our client most wanted to meet during the conference. Within six weeks of the presentation, our client was involved in detailed and ongoing discussions with three of those organizations about the possibility of acting as their IP trial counsel.

An attorney who had written an article in the Los Angeles Daily Journal  involving a significant recent change in the law and its potential implications.  The article was so well received that the attorney was asked on short notice whether she wanted to be interviewed for a video that would appear on the Journal’s website.  This would be the lawyer’s first media interview.  Gideon met with the lawyer for about two hours the day before the interview.    They worked together to identify three short, important, and easy-to-understand ramifications of the change in law, as well as rehearsing how to communicate them effectively on camera.     Our client reported that that the interview went well, that she felt prepared, and most importantly in the months following the interview, the lawyer has published a handful of follow-up articles in this publication.

A partner at a mid-sized firm was asked to speak at a break-our session during an industry conference.  The firm was looking to expand its representation of companies in that industry.  The speech, however, was originally booked by another partner the firm, and that partner couldn’t make it.  Thus we were stuck with the program description that was previously drafted.  We also didn’t have much leeway when it came to the speech’s title, or what the speech would cover.  But we did have some time craft a few memorable stories that would showcase the firm’s expertise and replace said PowerPoint slides with more compelling images.  Here is how we conveyed the idea that proposed statutory changes were intended to impact the industry: 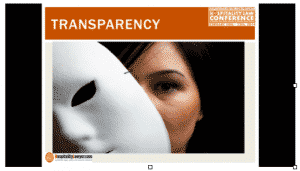 How to Get Started

Regardless of the type of law you practice or the format of the speech you are giving, you naturally want to present yourself in the best possible light and elicit the confidence of your audience. And if you’re already going to put in the time to speak, wouldn’t it be nice if the speech actually helped grow your practice? Whether you are part of a panel discussion at a bar association event, an industry conference, or are speaking for an hour by yourself, Rainmaking for Lawyers speech coaching can help you attract more and better clients.

Setting the Right Fee: How to Talk to Prospective Clients —

A Strategic Approach to Fee Arbitration in California —