You are here: Home // Blog // The Two Most Important Lessons Learned from 25 Years in the Law

I turned 55 this week. That still looks like a typo. And reaching this milestone – if it is one – reminded me of where I was 25 years ago.

On my 30th birthday, I deposed a building contractor in connection with a pro bono lawsuit. I was a junior associate at the L.A. office of Skadden Arps. The client was Covenant House California, a homeless shelter that focuses on helping runaway teenagers, and its director at the time, Fred Ali. Covenant House was involved in a real estate dispute with its landlord, who refused to return Covenant House’s substantial deposit when the organization vacated the premises. We were suing to recover the funds. The landlord countersued, claiming that Covenant House had substantially damaged the property before vacating.

The deposition was memorable. It mostly involved looking at dozens and dozens of pictures of soiled toilets and other bathroom fixtures. The contractor used the photos as the basis of his damage claims.  After a lengthy series of particularly gruesome pictures, I asked, “Your job isn’t all glamour, is it?” The building contractor laughed, as did the court reporter.

At trial, we were able to show that all the damage reflected in the photographs took place after Covenant House vacated the premises. I was the second chair. The lead attorney was Robert O’Brien, then a mid-level associate at Skadden. The judge ordered the landlord to return the security deposit and pay accumulated interest and awarded substantial attorney’s fees.

The landlord opposed the attorney’s fees awarded on the grounds that attorney’s fees shouldn’t be recoverable by lawyers working pro bono. In 1995, that wasn’t a settled issue in California. With the assistance of a few amicus briefs, the court issued a written opinion affirming the right of pro bono counsel to collect attorney’s fees if a contract provides for such fees. A few months later, as a token of Covenant House’s appreciation, Robert and I each received a replica of a sculpture (pictured here). Mine is one of the few objects that I have retained from my days as a practicing attorney.

Fast-forward 25 years, and as a consultant to law firms, my week has been focused on helping firms with succession planning, lateral partner questionnaires, speech coaching, and strategic planning. Many of these issues either didn’t exist in the law or would have been hard to predict even a short time ago. Fred Ali is now the President and CEO of the Weingarten Foundation. As such, he is one of the leading figures in philanthropy in Southern California. Robert O’Brien is now National Security Counsel to the President.

So what can be learned from this nostalgic look back? Some of you might be thinking that Fred and Robert have done more with their careers in the last 25 years than I have. Undoubtedly true, but obvious.

First, in a world that is rapidly changing, and where it is easy to get stuck in the minutiae of day-to-day work, including business development activities, what sticks with you over time are the causes you have pursued. If you seek to represent people and organizations that do things that matter to you or that you admire, you are far more likely to attract and keep the clients that you most want.

Second, embrace change. When I left large law firms to start a consulting firm, a lot of people thought that was crazy. And now, law firm partners are more likely to see leaving the law as a sign of intelligence. That is an oversimplification and gives far too much credit, but what is true is that the law and the world are changing too rapidly to tie your happiness and fortune to the status quo not changing.  Who knows, 25 years from now, and potentially a lot sooner, large law firms could disappear as independent entities, subsumed by even larger accounting firms.

Those who work as, and on behalf of, lawyers are fortunate to have careers that can span decades. Here’s to the next 25 years (or even more). 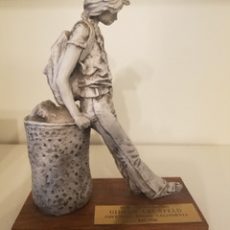