You are here: Home // Blog // Three Marketing Lessons Law Firms Should Learn From the Presidential Election

The content between Hilary Clinton and Donald Trump wasn’t exactly inspiring.  It did, however, demonstrate three truths about communicating a message that is particularly applicable to law firms that want to grow.

1.  A Memorable Brand Goes A Very Long Way:  However you feel about Donald Trump as a candidate or as the incoming President, you can’t ignore how powerful his brand has been during this election cycle, especially during the primaries.  Trump was a first-time candidate who demolished 16 competitors in the primaries.  Many of his competitors had much more experience and spent millions of dollars more than he did on television commercials.  And all that experience and money and endorsements withered in the face of the Trump name.  When you are on television for more than ten years and your persona is that of being wealthy and successful and in charge, you have a tremendous advantage over people whose name evokes no strong reactions.

And how many law firms are truly branded such that their very name evokes positive emotions and thoughts in the minds of their potential clients?  Almost none.  It is slightly more common for individual lawyers to have established reputations but that reputation is rarely constant or pervasive enough to rise to the level of a brand.  Usually it’s more a kin to saying that “she is a good lawyer.”  And there are many lawyers in any market who have that kind of reputation, so none of them have a true brand.  The biggest lesson to be gleaned from the election is that it worth the time and effort to transform your name into a brand.

2.  Spreading A Message Requires Perseverance:  Both candidates returned to Ohio, Florida, Pennsylvania, and North Carolina countless times.  In part, this is because of the workings of the Electoral College and that states are winner-take-all contests.  But even if they weren’t, you would still see elected officials returning over and over again to their key target audiences.  And they continually tinker with their message to see if they can maximize its impact.

Contrast this with how most lawyers communicate with their most promising and important potential clients and referral sources.  Too often they give up after one unproductive meeting, or when the potential client refuses to answer a single phone call or respond to a single email message.  Accomplished sales people know that sales often take place after they have had more than five prior contacts with the potential client.  This message seems to have eluded many lawyers.  This is especially unfortunate because the fastest way to grow a firm often involves landing a big fish.  And that takes effort and perseverance.  You can’t become a stalker but you can’t get discouraged easily.  You need to return to that potential client in smart and strategic way, as if you were trying to persuade an undecided voter on the eve of Election Day.

3.  Messaging Matters: What was Hillary’s message on her logo?  Can you remember it a month after the election?  And if you can, what does it mean?  Contrast the ambiguous phrase, “I’m with Her” with the phrases that Donald Trump repeatedly used during his campaign:  Make America Great Again; America First; Drain the Swamp, and others.  They are all short and easy to remember.

Moreover, his message had a higher emotional impact. His messages are more about what his candidacy will do for the audience.  Her message is about the candidate.

The risk in using Trump as an example of effective messaging is that many won’t be able to see beyond their dislike of him.  You don’t have to like him or approve or his candidacy to appreciate that there might be something to be learned about the way he communicated his message. 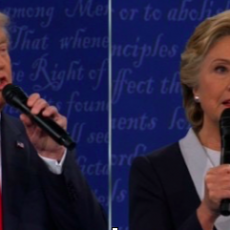