You are here: Home // Blog // What’s the Scariest Issue Confronting Your Law Firm?

A wise and accomplished financial advisor recently told me that her clients will happily talk about most aspects of their financial reality and goals except for one–cash flow. They will share their dreams of retiring in an exotic locale, funding college for their children and grandchildren, but won’t without prompting mention that they have less than $5,000 in savings. For many individuals, poor cash flow is the problem that is so scary that it often can’t be mentioned by name.

As a consultant to lawyers and law firms I have come across a similar set of behaviors. For some the scary issue is depression. I advised a brilliant lawyer who occasionally became so overwhelmed with running his practice that he couldn’t bring himself to open his mail for weeks at a time. For others it’s the fear that one or more law firm partners will never pull their weight or will otherwise prevent the firm from growing as it should. And like many individual investors, the scary unspoken issue at too many law firms is cash flow. Most commonly, the firm’s payroll is eating a lion’s share of revenues and the senior partners either don’t want to take a pay cut, make a capital contribution, or let some folks go.

The all-too-human response to facing scary issues is to minimize or avoid them until they create an emergency that can’t be avoided. We have all seen it. It’s the person who doesn’t change their diet or lifestyle until after they suffer a heart attack. It’s the difficult matter or client file that is avoided until the client files a malpractice action or a complaint with the state bar. There is a better way.

One way to address the scary issue that can’t be mentioned is to realize just how common it is. When we are in the throes of the scary problem it seems unique. It’s easy to convince ourselves that the partner who needs to be confronted about their unacceptable conduct towards coworkers will react in some unique way. In my experience that does not happen. There are plenty of difficult and argumentative law firm partners. And yes they may even yell and scream and carry on for a bit when you tell them that the firm can no longer afford to finance a contingency fee case that had racked up $400k in fees (or whatever your scary issue happens to be). But ultimately they calm down or leave the firm. I’ve seen both scenarios play themselves out. Either way the issue got resolved in a way that was a lot less scary than was initially anticipated.

Genuinely new scary issues are exceedingly rare. For a vast majority of seemingly scary law firm problems, strategies and techniques exist to help identify and improve the situation. And folks like me who are experienced in dealing with scary law firm issues can help you address them more quickly and less painfully.

You know that client file that you dread and that you have been avoiding? It’s probably located behind you on a credenza or out of sight in a filing cabinet. I learned this tidbit from an investigator for a disciplinary authority. Even the physical location of the trouble making file is fairly predictable.

I hate to break it to you but your scary issue isn’t likely to be unique. Moreover there are almost certainly things that can be done to make the problem go away or at least much less of a problem.

So as we enter a new year, isn’t this the time to take control and confront your scary issue once and for all? 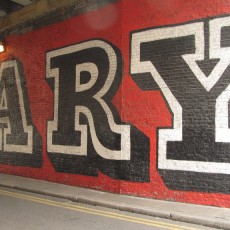 Image courtesy of Howard Lake under this license.